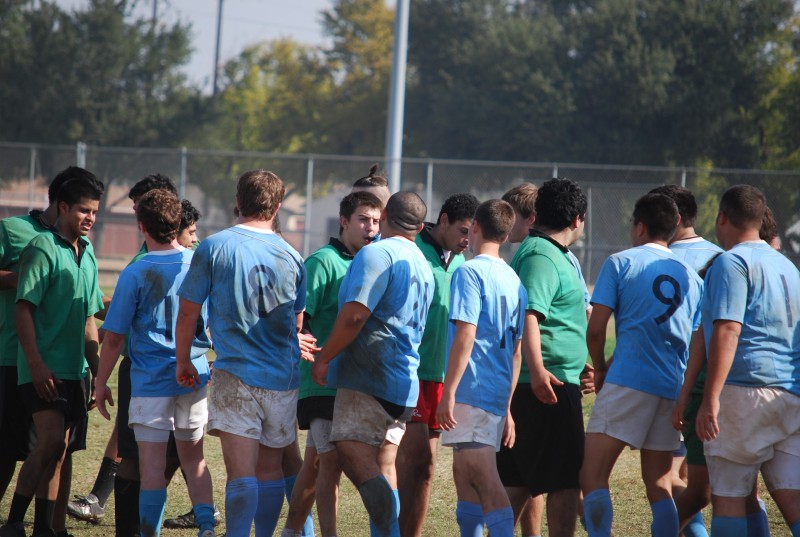 By Vongni Yang / Special to The Bee

The first time Herb Breen walked onto the field at Roosevelt High School in early February, he knew it was a long shot. Rugby in the barrio, he thought to himself, the notion seemed a fool’s mission.

The boys standing before him that first practice were a motley crew, if ever he saw one. They were the children of migrant farmworkers, of broken homes headed by single parents who had come to the U.S. with hardly an education. More than half the team, he would soon learn, were barely hanging on in high school themselves.

A volunteer coach who works for a fruit-and-vegetable company, Breen knew that his players lived in some of the most beaten-down neighborhoods of Fresno. But he didn’t understand, at least not then, just how beaten down they were.

These are neighborhoods where two out of every three Hispanic boys who begin middle school never finish high school, teachers say. It’s a place torn apart by gangs and ravaged by some of the most concentrated poverty in the country.

Breen didn’t know their names, but he suspected that most of them had never seen a rugby match, much less played in one. As he stood before them, they eyed him warily, a middle-aged gringo with a mop of curly gray hair and a matching beard who looked as wide as he was tall.

He eyed them back, and smiled.

There was Diego Moctezuma, a gifted freshman athlete who walked six miles to and from Roosevelt every day. All the boys, Breen would learn, confronted hard choices: Moctezuma’s was whether to play rugby or use his extra time to help his parents in the fields. He decided to do both.

There was Juan Partida, whose mom was sick with cancer and counted on her 15-year-old son to be her caregiver. He’d feed her, make sure his little sisters were safe and then furiously pedal his Mongoose bicycle to make it to practice.

There was Jeremy Gonzales, who kept dropping the ball and getting chewed out by Breen, until the coach learned that Gonzales couldn’t see the ball coming. His eyesight was poor, and his parents couldn’t afford to buy him contact lenses.

There was Juan Alaniz, who lives in a 750-square-foot house in Calwa with six family members. The neighborhood is so shot with violence that he spends as many waking hours as he can at school — moving from classroom to weight room to playing field.

And there was, for a time, a freshman named Nicholas “Nico” Quiroz, a tiny, fearless kid who would play his heart out in the pouring rain in the third match of the season. Two nights later, on a darkened street where he was playing midnight graffiti artist, he would be found dead from a knife wound in the chest.

He became one more victim in an open fight among teenage tagger gangs in the neighborhoods of southeast Fresno.

It would be too easy, too trite, to say that out of that tragedy a team was born and a season reclaimed. But that’s exactly how the boys and their coach now see it.

There was no school bus to take them to matches; no cheerleaders to cheer them on; no uniforms until midseason. The first rugby balls they played with had been given to them by the boys from Bullard High.

They were a “bunch of Mexican kids from the ‘hood,” they said with pride, led by a stubby Irishman who broke out his lucky Celtic kilt on game day. Some matches, they barely had the required 15 players to take the field. It was a field without a scoreboard. Oftentimes, they didn’t know who was winning or losing. That’s how much the game of rugby confounded them.

But it was a season that none of them will ever forget.

“I did not believe rugby could ever be as fulfilling as a coach as it was as a player,” Breen said. “But it was amazing to watch those kids play.

“Don’t get me wrong. There were obstacles galore. Just to get them through a full week are challenges that would boggle most minds. I grew up in Detroit, thought I saw tough neighborhoods. But these kids, they’ve seen what no kids should see.”

Junior Alec Bailey said, “I won’t forget it because of the guys. It’s like you can’t forget it — every little thing. There was a brightness to the team. Playfulness and a lot of fun. Everyone clicked in like brothers.”